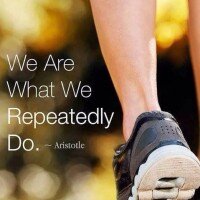 Australia is currently the fourth most obese first world country, after the United States, Mexico and New Zealand. According to the OECD report, 28.3% of Australian adults were obese in 2011 – up from 21.7% in 2000. Australia also ranked 19th place in terms of overweight children in developed nations. Obesity costs the Australian government billions in healthcare funds and reduced productivity rates each year
(Source: Organisation for Economic Co-operation and Development).

So we are not the worst, but we’re getting there. And yet we have a proud national self image of the ‘lucky country’, out doorsy, sporty, wide open spaces and ocean loving people. But that’s not the whole story. We are also car orientated, affluent, time poor and addicted to our smart phones, computers and gadgets.
Our children are bombarded with the food industries logos and icons, coca cola, Mac Donald’s etc. By the time they are 2 or 3 years old they can recognise those logos and they’ve probably sampled the food that is fatty, sugary, salty and they want it. Real food becomes unappealing and bland, it doesn’t satisfy.

A few generations ago children were encouraged to play outside, but now they spend hours every day playing on their games consoles or watching TV.
Junk food is cheap and kids love it. The parents don’t have to cook, they don’t even have to get out of the car!
We live in a time of affluence in a culture of convenience, the portions are getting bigger and the life style is getting increasingly sedentary. You don’t have to be Sherlock Holmes to predict where it’s all leading. According to a study by the State of Victoria over 80% of Australian adults will be obese by 2025.

So what to do? What can one do? Well, we can take responsibility for our selves and our family. Hypnosis can make changes to our ingrained patterns and even the most fundamental and instinctive patterns of food. Kilo Loss is natural effective way to address diet, weight and lifestyle changes.